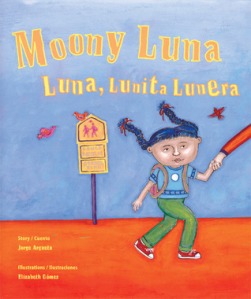 Five year old Luna Lunita Lunera fears that she will meet monsters on her first day of school. Her adoring parents remind her that she is a big girl now, bigger than the moon, and that there is nothing to fear. She finds the courage she needs to get to school but decides that maybe school is not such a good idea after all. Again, her parents encourage her to find her big girl strength and take her to school. While there, Luna is still not convinced that there are no monsters at her school and hides under a table. Her fellow classmates look for her and ask her to come out and play. Luna joins them in all the singing and coloring and decides that maybe school is not so bad. At pick up, she tells her parents that there were no monsters at school and that tomorrow she will be bigger and stronger than the moon!

Author Jorge Argueta and illustrator Elizabeth Gomez give life to the most adorable character in Latina/o Children’s literature. Together they have created an encouraging and loving story about a child’s fears about their first day of school. One of the fascinating aspects of this book is the multiple ways that Luna’s story is told. Because it’s a bilingual book, something that is very common among Latina/o children’s books, the story is told is Spanish and English. Simultaneously, Gomez’s illustration present an additional storyline–the “monster’s” first day of school. Gomez’s illustrations suggest that there is indeed a monster at school and that it is also afraid of its first day of school. Another significant factor in this text is the positive representation of the parents. Luna’s mom and dad are present throughout this pivotal moment in her life. Her mother reads her a bed time story at night and her father braids her hair in the morning. And both of them go pick her up. Their presence is extremely important because it challenges negative and harmful stereotypes about Latino parents taking a back seat in their child’s education. Such stereotypes are further challenged by allowing the character of the mother to be there to read Luna a bed time story. Lastly, the promotion of bilingual education, seen through the offering of the story in Spanish and English and through the depiction of Luna’s classroom as a bilingual classroom with a Latina teacher, is extremely powerful. Given national attacks on bilingual education and budget cuts on such programs, Argueta and Gomez present a wonderful opportunity to advocate for bilingual and multicultural education. Overall, this book is a must read and must have because it’s way brilliant.

*Originally published on Goodreads and also available on Latin@s in Kids Lit: http://latinosinkidlit.com/2014/05/15/libros-latin0s-moony-luna-luna-lunita-lunera/