The notes from his harmonica carried us from poem to poem as he recounted stories of his childhood and brought us to the present and the tragic realities of Ayotzinapa and Sandy Hook. On October 7th, 2015 Juan Felipe Herrera, the first Latino US Poet Laureate, read from his most recent book of poems, Notes on the Assemblage, at the historical Herald Washington Library in Chicago.  The event hosted by the Poetry Foundation, and cosponsored with the Library of Congress and the Chicago Public Library, created an intimate setting from which to enjoy Herrera’s humble and quirky personality. I sat front row center with his newest book in one hand and a notebook in another ready to soak up his brilliance. I was invited to the event as a guest of Irasema Gonzalez, Development & Communications Director at ElevArte Community Studio[1] in Pilsen Chicago. ElevArte partnered with the Poetry Foundation to bring, create, and share poetry with at-promise youth[2] in Chicago, and I am currently their poetry Teaching Artist. I had met Herrera once before when he taught at the University of California Riverside and am familiar with his work because I wrote about his children’s illustrated books in my dissertation. Nevertheless, I was excited to meet him as the US Poet Laureate. Herrera walked onto the stage in a yellow button up shirt and was greeted with a standing ovation. He brought his harmonica to his mouth and greeted us back.

After briefly speaking about his upbringing as a migrant farm worker, Herrera read “Border Bus,” a poem in Spanish and English about two (im)migrant women being transported to/from a detention center. The poem switches from Spanish to English and back as the women converse about their situation. I found it powerful to hear Herrera recite poetry in Spanish and speak to the perils (im)migrants face when they journey north and those they may experience in detention centers. I was overwhelmed by a great sense of pride at hearing Herrera read this poem in particular. I’ve never been an avid follower of any US Poet Laureate until Herrera. I had a similar feeling when Sonia Sotomayor was appointment to the Supreme Court. When I was younger, I wanted to be judge, and I still want to be a writer. It’s empowering and amazing to see Latinos hold these prestigious positions.

After his reading, Herrera answered a few questions about his inspirations for becoming a writer and about his desire to make poetry available to everyone. During the brief Q & A, he mentioned the teachers that pushed him to speak up. He spoke about Mrs. Sampson, whom he also wrote about in his children’s illustrated text The Upside Down Boy, and how she helped him find his voice. Mrs. Sampson was present at Herrera’s US Poet Laureate inauguration ceremony. He also spoke about Mr. Schuster (spelling might be incorrect), his 7th grade music teacher, whom Herrera had lied to about his ethnic identity saying that he was Hawaiian. Herrera explained that he didn’t know what to say when Mr. Schuster asked him what he was anyway; he panicked and responded with a lie. Herrera closed the event by reading and dedicating the poem “Half-Mexican” to Mr. Schuster. “Half-Mexican” captures the complex and rich histories that congregate when using Mexican as a marker of identity: “You are Mexican./ One half Mexican the other half/ Mexican, then the half against itself” (87).

It was truly a great evening with the Poet Laureate. The moments that stuck with me the most, though, are those when he talked about the impact his teachers had on him. Herrera said that teachers like Mrs. Sampson and Mr. Schuster “shook him” and “pushed him” forward.  I think back and teachers like Mrs. Roethke, my Spanish high school teacher, and Dr. Richard T. Rodriguez, my Latina/o studies professor in college, propelled me to pursue higher education and find my voice. Teachers like these are significant not only because of the impact they have on young minds, but also because they challenge dominant narratives that tell young students of color that they do not belong. Herrera mentioned that speaking Spanish was still punishable in classrooms when he was going to school. When I was younger, “undocumented and unafraid” did not have the same momentum it has now. Today, there are several reasons that make it difficult for students of color to feel safe, encouraged, and whole in US classrooms. The discrimination that students of color face in classrooms is another testament to how amazing it is to have someone like Juan Felipe Herrera as the US Poet Laureate. 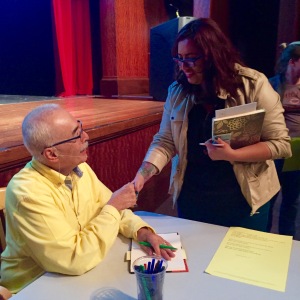 In general, the “life-changing teacher” is a common character in Latina/o children’s and young adult literature. Herrera’s own The Upside Down presents Mrs. Sampson as a character that helps little Juanito settle into his new school and encourages him to sing in front of the class. Ms. Diaz, in Cindy L. Rodriguez’s When Reason Breaks, has an active role in helping the lead protagonists come to terms with their inner struggles. In René Colato Laínez’s Waiting for Papá, Miss Parrales encourages Beto to share his story of being separated from his father because of existing immigration policies. In Luis J. Rodriguez’s América is Her Name, Mr. Aponte teaches América to use poetry as tool for healing. Ms. Abernard, in Isabel Quintero’sGabi, A Girl in Pieces insists that Gabi keep writing and sharing her poetry. And then you have the characters that serve as a “teacher figure.” The abuelita in Herrera’s Super Cilantro Girl and the abuelita in Gloria Anzaldúa’s Prietita and the Ghost Woman teach their granddaughters about the power and strength of plants, herbs, and nature. The abuelita in Sonia Manzano’s The Revolution of Evelyn Serrano teaches young Evelyn to have pride in her Puerto Rican culture and history. And then there are the adults that serve as mentors like Sonia, the lawyer that the young characters in Gloria Velasquez’s “The Roosevelt High” series often turn to for help.

I felt a bit like I was a part of some history in the making simply by sitting in that auditorium and listening to Juan Felipe Herrera perform. And by the end of the event after listening to him talk about the teachers that pushed him to find and use his voice, I couldn’t help but think that Herrera is now the nation’s poetry teacher and that he will shake us and push us to write, speak, share, change, and love.

[1] ElevArte is a community-based organization which uses the arts as a portal for creative youth development. The organization offers a range of programs including youth led projects like the “We Are Hip-Hop” Festival designed to give young adults an opportunity to be active community leaders and organizers. They also offer in-class programs like “Art of Change” which focuses on teaching science through the arts to elementary and middle grade students. They offer after-school activities like sewing and stitching. They also organize and offer many community events like their annual Pozolada fundraiser. For more information on ElevArte visit their website at www.elevartestudio.org and follow them on twitter @ElevarteStudio.

[2] At-promise youth is a term used by ElevArte as a way to challenge negative language like “at-risk” that sees what youth lack rather than their potential. ElevArte seeks to create a space where youth are encouraged and empowered throughout every aspect of their engagement with one another.